Last night’s Bookseller Industry Awards lived up to our expectations as an exciting and glamorous affair kick-started by Inspired Selection’s champagne reception overlooking Hyde Park. As sponsors of this part of the night, we were so happy to see the room filling up and the bubbling atmosphere of anticipation before the announcement of the winners later in the night. With a camera crew winding their way through the crowd picking out authors and key industry names to interview, the mood of the evening was set and there was a real sense of celebration and achievement.

Onwards to the ballroom, where we wined and dined before the Awards began – Mariella Frostrup was an engaging and entertaining host who clearly loves the publishing industry and was just as happy to be there as we were to have her as the host. She regaled the crowd with an initial breakdown of the awards to come and then the winners were announced.

Each and every winner was humbled by the recognition and first and foremost thanked their colleagues and the passionate teams they work with. Acceptance speeches were short but infused with gratitude and delight with a theme establishing itself early in the evening for people claiming that their job was the best job in the world! It was, without doubt, an event charged with a pride for the publishing industry and round after round of enthusiastic applause welcomed each winner to the stage.

It was a night for independent publishers, established and renowned houses, newcomers and old-timers alike and a smattering of non-traditional, digital input too. Bookshops and libraries were celebrated and it was really heartening to see both their resilience and response to the changes in the industry and perseverance to serve those out there who still want to race through a print edition on a Sunday afternoon!

The BA Award for Outstanding Contribution to the Book Trade was awarded to Dame Gail Rebuck for her hard work on the Books Are My Bag campaign despite being tied up at the time with a huge merger. She delivered quite an emotional acceptance speech whereby she thanked all the bookshops who stocked the bags, the celebrities who helped out by carrying them and all the publishers who supported what can now be referred to as a “movement”. It succeeded in its goal – to promote books to a world that was (or is?) at risk of forgetting their importance. The Bookseller Special Award went to Pan Macmillan for being a loyal and consistently successful 15-year publishing partnership. Follow this link for a list of all the deserving winners of the night.

We had an amazing night and were really so proud to have our name associated with the event. Thank you to the Bookseller team and Nigel Roby for the credit to Inspired in his opening remarks. It is nights like these that solidify what a creative, forward-thinking yet deep-rooted industry we work in and how much there is to celebrate and to look forward to… 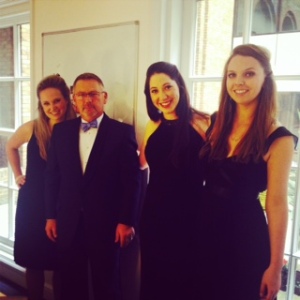 See you there next year!

Here at Inspired Selection, we are passionate about the publishing industry; we talk about publishing, read about publishing and attend all major publishing events like the one you’ve just read about. We would love to meet you at events so do feel free to come up and introduce yourselves! If you’re interested in opportunities within publishing do keep in touch and register for our Vacancy Update Service as well as keeping up to date with us on Twitter